TECNO is preparing for the launch of another budget smartphone under its Spark series called the TECNO Spark 9T, an iterative version of the Spark 9 smartphone which was launched a week ago. The company has listed the upcoming smartphone on Amazon India, along with some specification highlights.

The smartphone has a glossy back and a stripped design with the tag “STOP AT NOTHING” on the right side. The phone also has a huge camera space on the back with three 50MP rear cameras. A U-shaped notch on the front houses a front-facing camera and a huge 6.6-inch Full HD+ display. 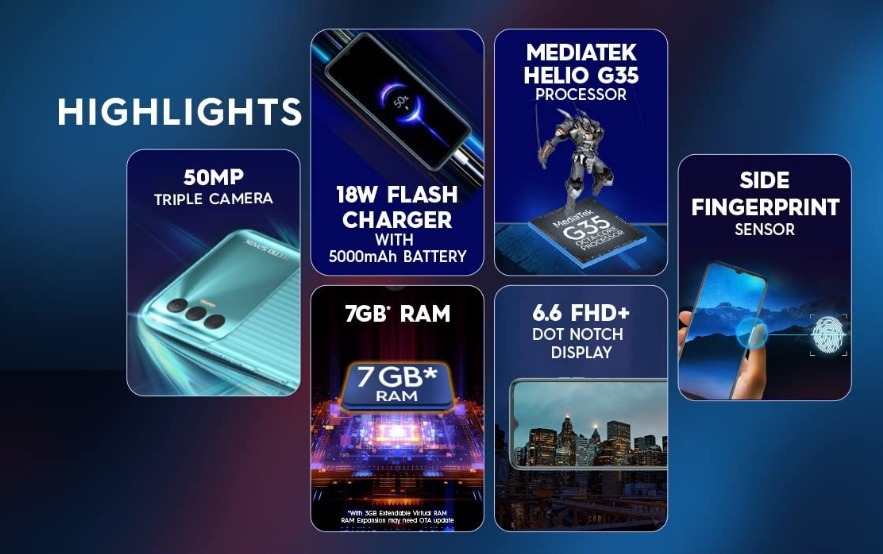 TECNO has revealed that the Spark 9 will be powered by the MediaTek Helio G35 SoC, which is a 2.3GHz Octa-Core 12 nm processor with an IMG PowerVR GE8320 GPU, 4GB of RAM, and an additional 3GB of virtual RAM. The smartphone is powered by a big, 5000mAh battery that supports 18W rapid charging.

The smartphone’s detailed camera specifications are currently unknown. However, the main sensor on the rear will be a 50MP sensor, paired with two other sensors and a huge LED backlight. The smartphone will have a fingerprint scanner on the side.

We should know the smartphone’s launch date and other details in the coming days.