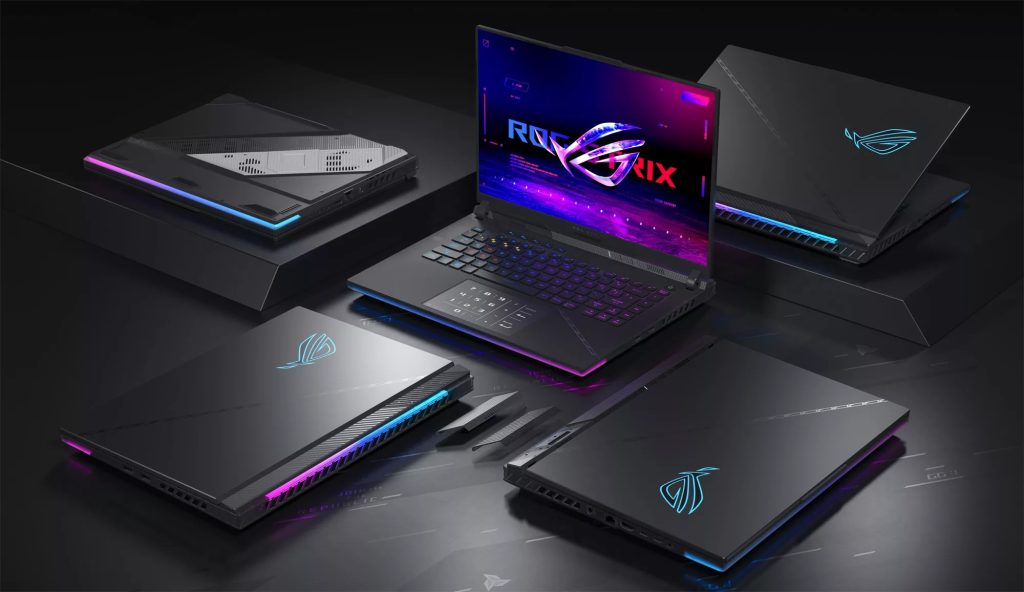 Due to a redesigned chassis that supports the larger 16-inch and 18-inch 16:10 aspect-ratio screens, the Strix SCAR 16 and 18 have been rebranded. The latest ROG QHD, 240Hz Nebula HDR display with Mini LED technology is now available for both versions. 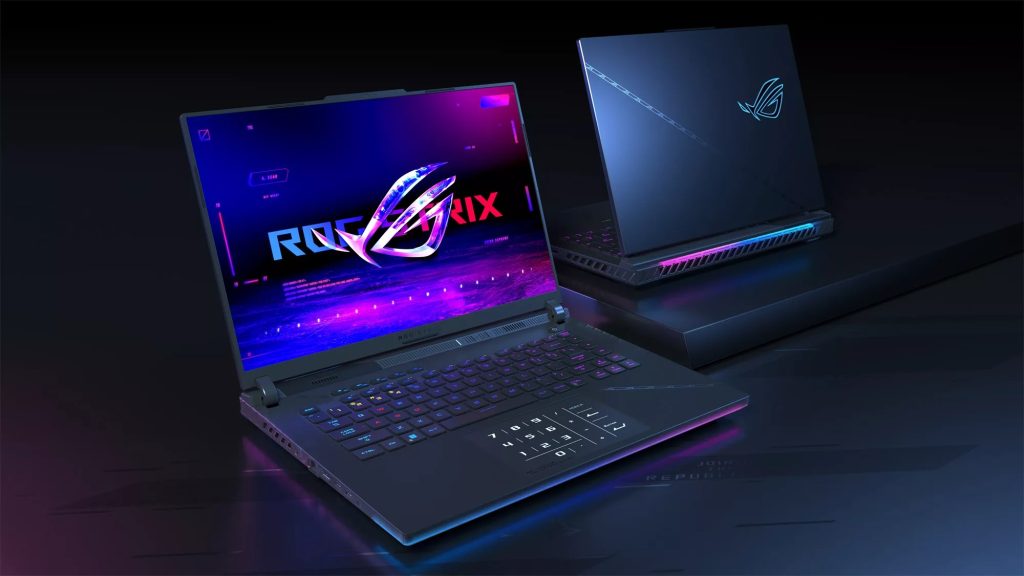 ROG’s new chassis offers improved cooling, allowing the CPU and GPU to accelerate for maximum framerates. The new Strix SCAR 16 and 18 have a full-width heatsink and Tri-Fan Technology for more efficient heat removal. With Thermal Grizzly’s Conductonaut Extreme liquid metal, ROG has made the high-end parts of the SCAR 16 and SCAR 18 work better. 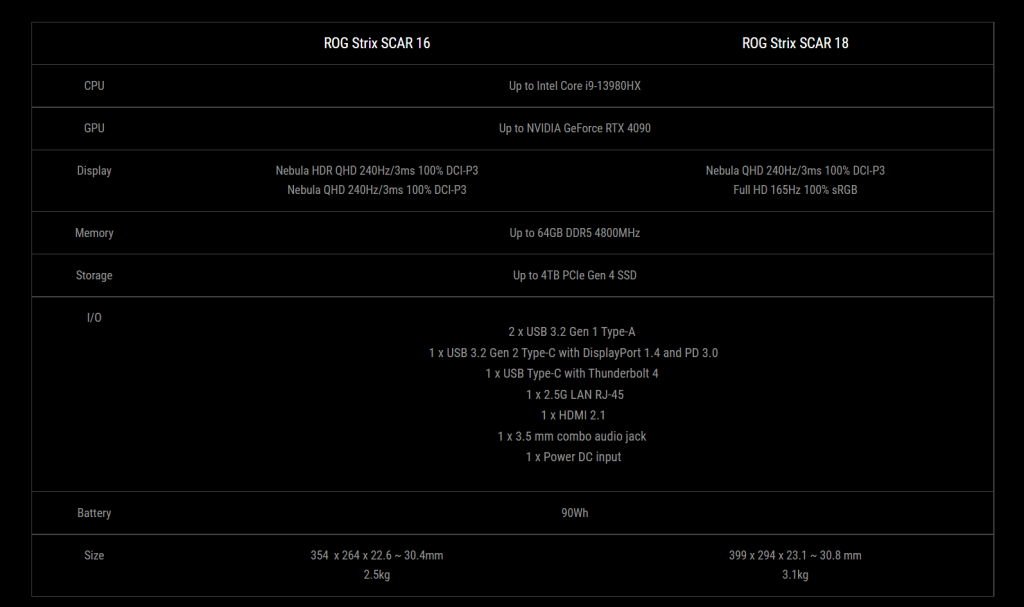 The new Strix G16 and G18 have the same 13th-generation Intel Core i9 13980HX processor and may be outfitted with an NVIDIA GeForce RTX 4080 laptop GPU for esports. 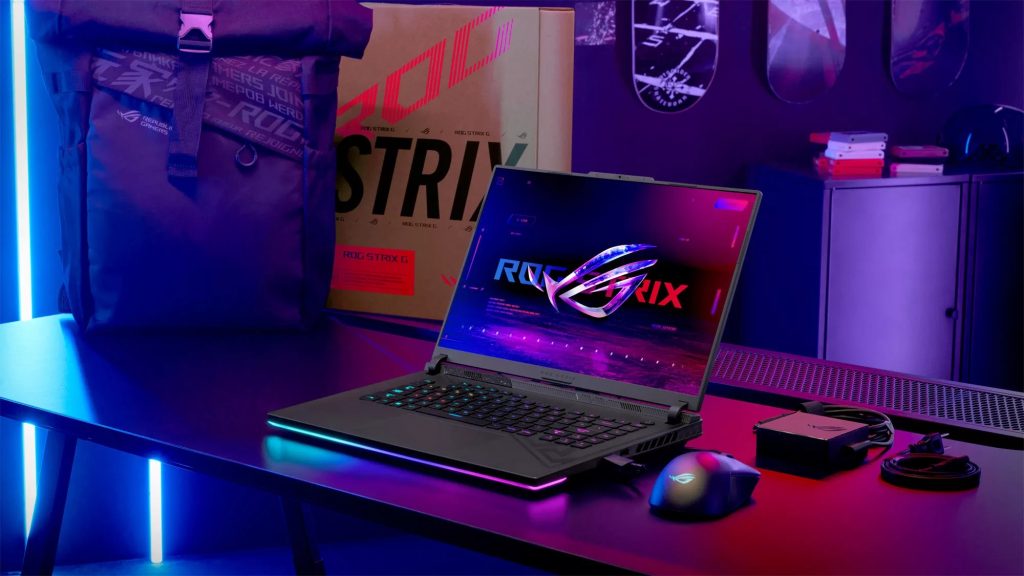 The Strix G17 and Strix SCAR 17 have been updated with AMD’s Ryzen Zen 4 processor, which has up to 16 full-performance cores. The 2023 Strix lineup is poised to rain fire down on the opposition with NVIDIA’s latest GeForce RTX 40-series laptop GPU. 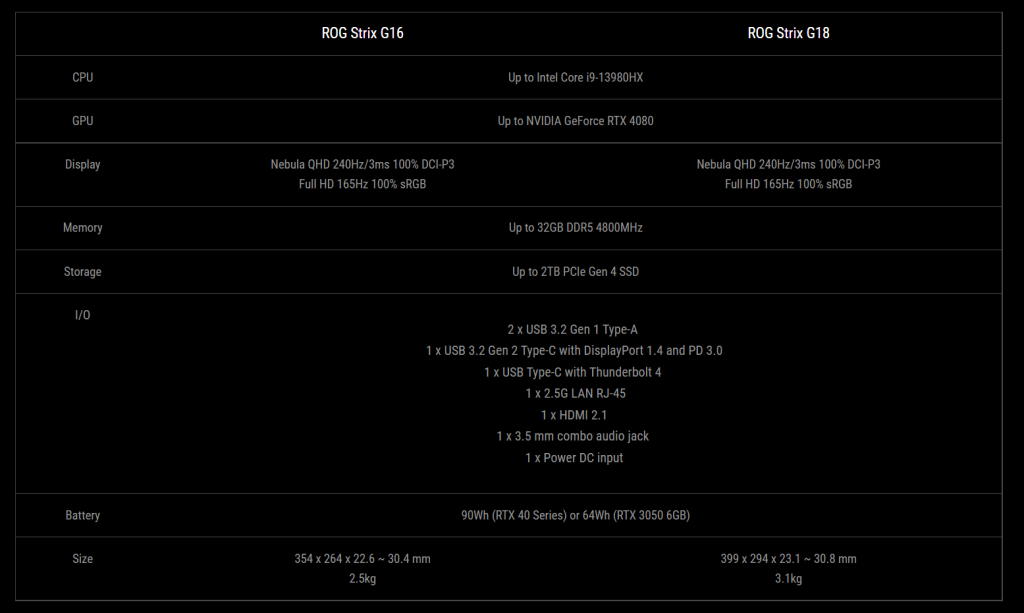 ASUS also announced that the Strix SCAR 17 and Strix G17 will be refreshed in 2023. Both machines have a new AMD Ryzen 9 processor that can handle gaming or content development projects. Because of the special vapor chamber within, the Strix SCAR 17 can support up to an NVIDIA GeForce RTX 4090 laptop GPU at a maximum TGP of 175W with Dynamic Boost.

The Strix G17 has an NVIDIA GeForce RTX 4070 Laptop GPU with a maximum TGP of 140W, giving you adequate power in the latest games. Both workstations have QHD 240Hz panels with NVIDIA Advanced Optimus and G-SYNC for high-powered and tear-free gaming.

All Zephyrus versions have Dolby Atmos speakers, a 3D microphone array with different modes, and two-way AI noise cancellation. The G14 and M16 have an FHD IR camera, and the G16 has a 720P camera. 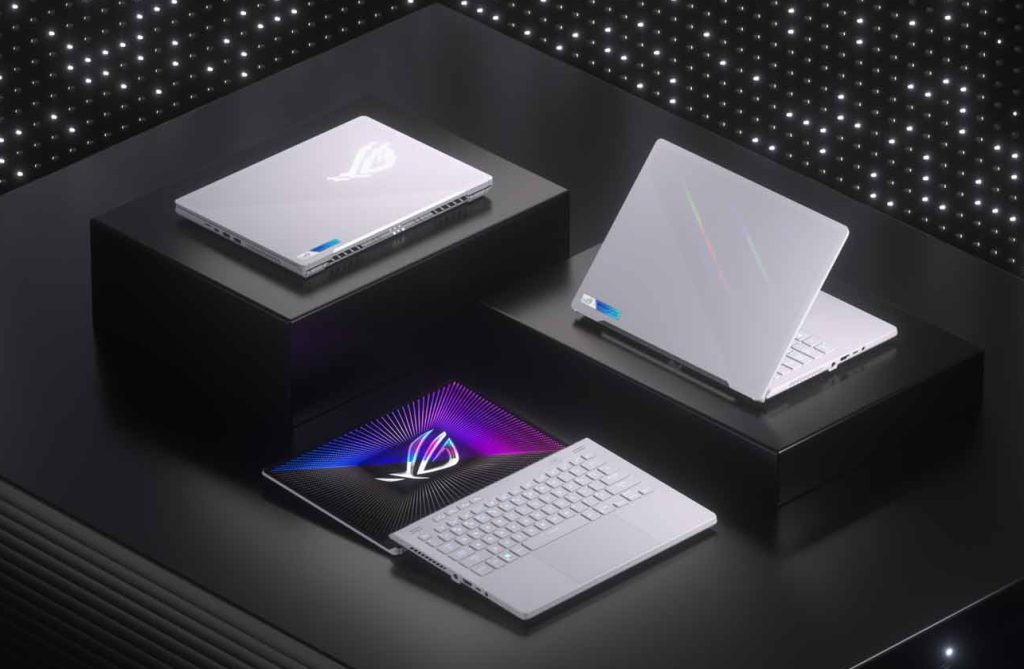 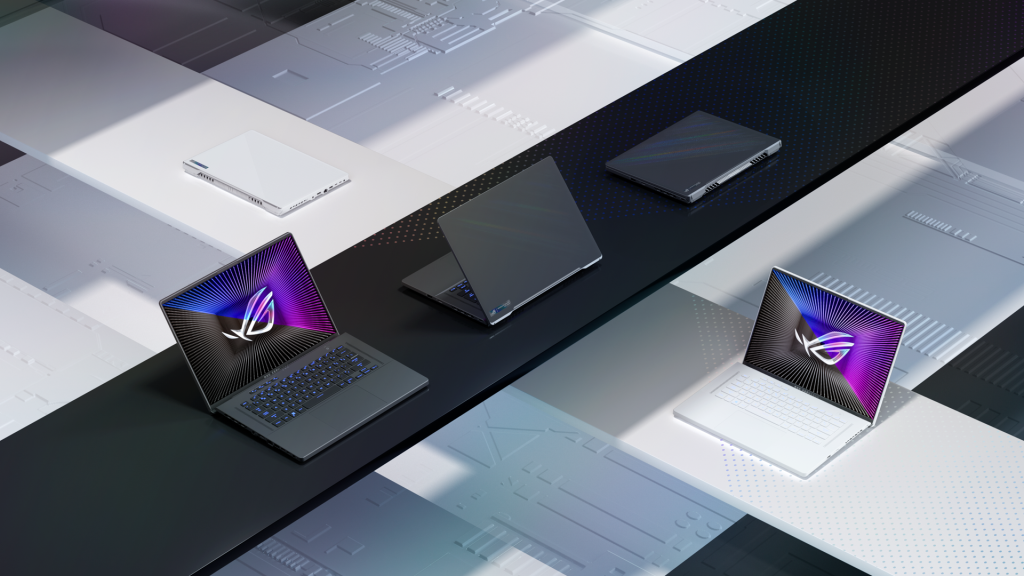 ROG Zephyrus M16 has a 13th Gen Intel Core i9-13900H processor and an NVIDIA GeForce RTX 40 series laptop GPU with a 145 W maximum TGP, a MUX Switch, and NVIDIA Advanced Optimus. Thunderbolt 4 is on the G16 and M16, and both have the configurable AniMe Matrix display to show off the user’s personality.

The ROG Zephyrus G16 has a 94% screen-to-body ratio, a 90 Wh battery, and HDMI 2.1. The ROG Zephyrus M16 has a 92% screen-to-body ratio and 16:10 aspect ratio with a QHD Mini LED 240 Hz, 3ms ROG Nebula HDR display with G-SYNC. It has ROG Intelligent Cooling Tri-fan technology, a full-width heatsink, and a 90 Wh battery with Power Delivery 3.0 that can be charged quickly. 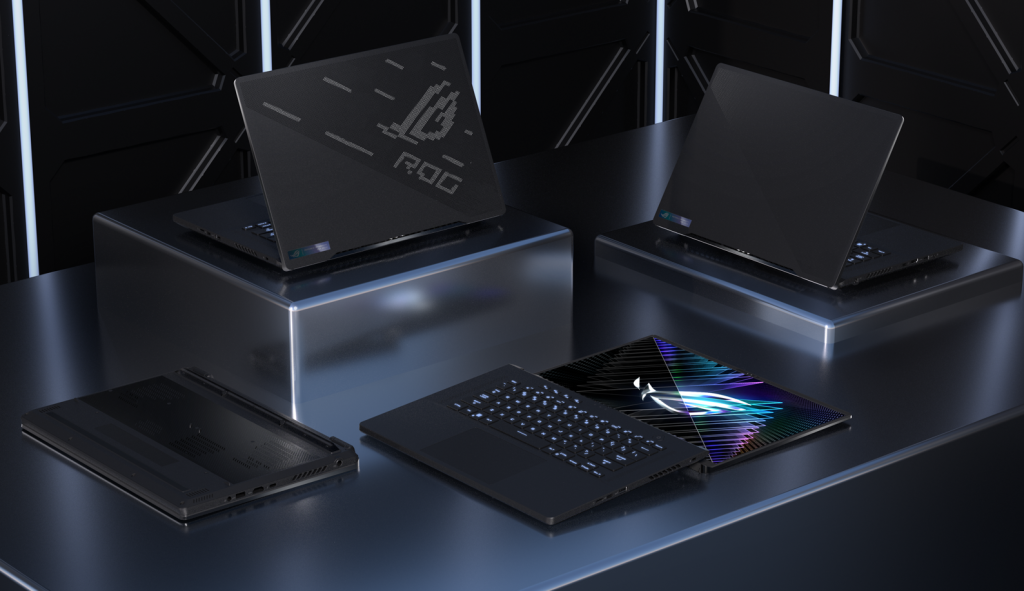 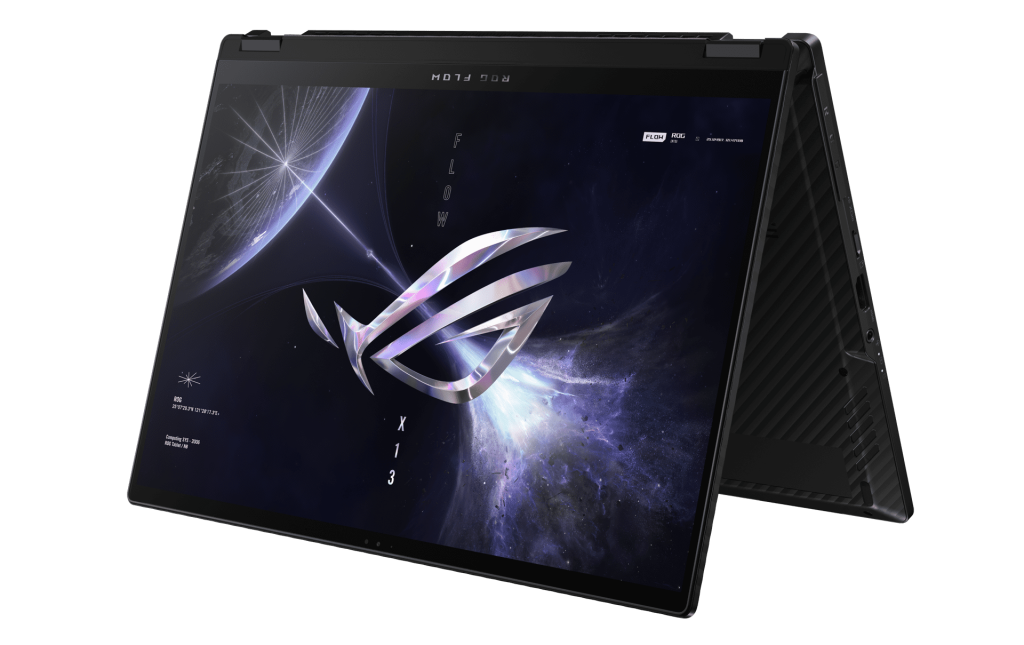 The powerful ROG Flow Z13 (GZ301) gaming tablet has a 13th Gen Intel Core i9-13900H processor and an NVIDIA GeForce RTX 40 series laptop GPU, with G-SYNC and DDS 2.0 support, in a 13-inch chassis that weighs 1.1 kg and is 12 mm thick. Multiple viewing angles offer up to 170° of adjustability, and XG Mobile external GPUs are supported. It supports keyboard, mouse, controller, and touch.

The 13-inch Nebula Display has 100% DCI-P3 coverage with a QHD 165 Hz panel. The touchscreen is scratch-resistant Gorilla Glass DXC and has Windows Hello. It is quiet even when fully loaded due to a 2-in-1 form factor designed to maximize airflow efficiency, a vapor chamber, and liquid metal cooling.