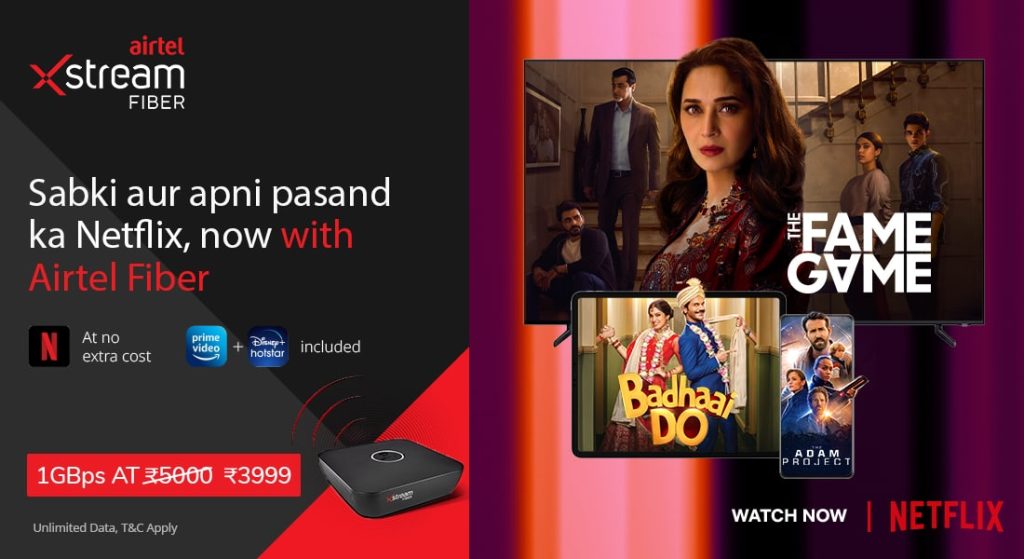 For the first time, Airtel Xstream Fiber, the company’s broadband connection, has begun bundling complimentary Netflix subscriptions with its Airtel Professional and Infinity Plans, similar to other competitors such as JioFiber.

Customers who subscribe to or upgrade to the Airtel Professional Plan, which costs Rs.1498 per month, will now have access to Netflix’s basic plan, which costs Rs.199 per month and allows users to stream content in 480p on a single screen. To recap, this plan includes an unlimited data allowance at a speed of 300Mbps, as well as a complimentary subscription to Amazon Prime, Disney+Hotstar, Netflix Basic, and Xstream Premium, among others.

Consumers who subscribe to or upgrade to the Airtel Infinity plan, which costs Rs.3999 per month, will now receive monthly access to Netflix’s premium plan, which costs INR 649 per month and allows users to stream 4K contents on up to four screens simultaneously. To recap, this package includes an unlimited data allowance at 1Gbps, as well as complimentary subscriptions to Amazon Prime, Disney+Hotstar, Netflix Premium, and Xstream Premium, among others.

For activation of Netflix on Airtel broadband plans, scroll down to the ‘Enjoy your rewards’ area on the Airtel Thanks app’s ‘Discover Thanks Benefit’ tab and look for ‘Netflix.’ On the Netflix product description page, click ‘Claim,’ then ‘Proceed.’ To finalise activation, the consumer will be taken to the Netflix website. Customers can also activate the plan by going to the Airtel website.